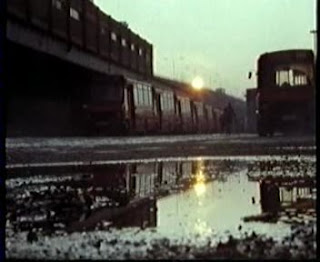 I think that the determining moments in your life are not seen as such until much later. You can only weigh their importance once they are in the past, and maybe that’s the great tragedy of time.
The children’s section of our school library housed a very small video compendium, mostly consisting of documentaries and bad films. When I was a boy, at the end of every semester the class would hold a pizza party where we would watch movies and relish in the knowledge that we were at the doorstep of summer vacation. Our teacher would ask for a certain kids’ movie—usually a Charlie Brown special or one of the Clifford the Big Red Dog tapes—and before long, the video lady, as she was called, would arrive.
The video lady was slight and always looked tired. She had big hair and spent all her time in the video room. I don’t know why I was fascinated with that place, maybe it was because something was always playing. They always had the news on, playing on one TV, with multiple other movies, recorded news from the past, or documentaries playing at the same time. The place was littered with cameras, costumes used by the Drama club, and shelves stacked with tapes. It had come to serve as storage for the entire school. The concept of spending your days working away in that room, surrounded by the past and the present in video form, connected with this fictionalized account of reality, vastly appealed to me. That I was already so nostalgic and taken by such things at that age is a little preoccupying.
The video lady was cordial and patient, and often I made up excuses to spend time in that room. Usually I was running errands from teachers that I had invented. In one of those many excursions I came upon a couple of cardboard boxes tucked away under a bottom shelf, crammed with old tapes. Pulling the box out released the pungent smell of dust. All of these tapes had cryptic labels. I distinctly remember “DOME”, “FUSE BOX” and “TWELFTH FLOOR”. I took one that was labeled “MULTIPLE BIRTHS”. Not sure why.
I hid it under my jacket and then stuffed it in my backpack when no one was looking. Seeing as the tapes were apparently forgotten, I figured that nobody would miss it.

Back then my parents had a big old Betamax sitting in their room, which they seldom used. My grandfather had brought it for them from America, I think. Back then everyone brought everything from America because our country, in its current state of disarray, could barely supply necessities, much less tapes of romantic comedies. So all we had were a handful of bootlegs, most of them badly-recorded from foreign signals intercepted by local pirates.
Handling the old thing was a hassle. My parents were at some wedding or cocktail party and wouldn’t be back until past midnight. So I put the tape in and sat down to watch.
It was grainy and the image had decayed, but it wasn’t hard to make everything out. It was filmed on a camera standing on a tripod, facing the shore. By the color of the gray skies and septic hue of the sea, not to mention the various empty bottles strewn about the sand, I could tell that this was a nearby beach. At the very beginning you can see the shadow of a person adjusting the lens, then they move out of the frame and are never seen again. The footage is simply a long recording of the thunderous back-and-forth of the waves, with cold wind howling in the background. In fact, just watching the tape made me feel chilly; even though I’m pretty sure it was summer at the time.
I sat at the foot of my parents’ bed and watched. I was prepared to see something disturbing—at the time I wasn’t sure of how childbirth worked, after all—but all I saw was the sea. About ten minutes in, an emaciated, stray dog walks across the sand, sniffs a discarded bottle and walks back out of the frame.
All in all the footage lasted about twenty-five minutes. I remember almost nodding off but forcing myself to stay awake. Then there’s that final minute.
After almost a half-hour of recording the eternal motions of the sea, you notice something different. At first they seem like three black spots some ten meters away from the shore. Like three buoys in the water. Then they begin to move forward, closer to the sand. As they do, they begin to emerge. I realized that they weren’t buoys. They were heads, sitting on necks, giving way to shoulders. Three full-grown men emerging from the cold water. The distance, the quality of the video and the lighting make them look simply like black silhouettes. I think they were naked. They begin to walk out of the water. They move in unison, almost taking steps at the same time. They are very tall. The water is only up to their knees and they’re walking towards the camera in this arrhythmic gait when the footage ends. Whoever was filming cut it off right there.
It’s hard to trust my young and impressionable mind on this, but I’m quite sure that the footage was one continuous shot with no cuts.
At the time I didn’t know what any of it could mean. I guess I still don’t. I removed the tape—almost forcefully—and put it back in my backpack. The next morning I tossed the tape into the basket where students leave books that they’re returning to the library. Obviously the video lady must have known that somebody retrieved that tape from the room.
Apparently she never suspected me, though. The next time I saw her she gave me her usual tired-but-polite stare and asked me what I was here for, a cup of steaming coffee between her arthritic fingers. I’m fairly sure that the cardboard box with the other tapes disappeared.
It seems funny to say now, but I think that was the beginning of my obsession.
Publicado por L.B. en 9:06