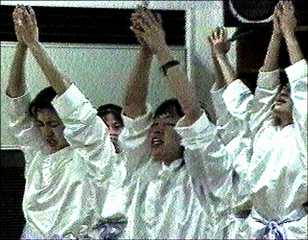 Our university outlawed smoking in campus only recently, which comes as a surprise to most people. I guess it hasn’t fully seeped into our culture that second-hand smoke kills or whatever, but until very recently, most universities allowed in-campus smoking. Now, at certain times during the morning and early noon, the same mass of students gathers outside the campus entrances to puff away. B. is part of this group, of course; he has tried to quit innumerable times and failed. F. and A. accompany him out of solidarity, or sometimes simply to bum cigarettes from him.