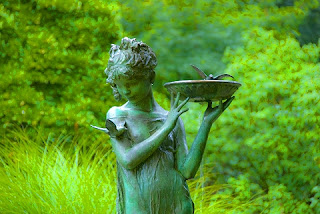 Fortunately he is rich (as far as we can tell) and lives in a stately, old house with statues on the garden that look like creatures out of a painting by Hieronymus Bosch, a pool that is never filled, iron bars covering windows overgrown with brittle vines. It’s spacious and empty; it’s located next to that one terrain that used to be a school until the late eighties. The first time I went there I had to ask a nearby watchman for directions. I gave him the address; he said there was no such house. Half an hour of walking later, I found it.

I was two years into my university studies at this point; I was bored and resentful at my parents for having encouraged me to choose this career path, so every week I skipped class more often. It reminded me of high school as so many other things do. There were policemen making lazy morning rounds around the neighborhood and housewives in sweatpants walking their dogs. Everyone else was working, studying or doing something allegedly useful with their time. The weather was grey and crisp.

Pushing the gate open and letting loose some dust in the process, I had to wander around the house and yell out for F. I had figured I might as well stop by and see the much-discussed egg for myself. I walked into the living room to find him, surprisingly, with X.

They were playing an old record that I didn’t recognize and sitting across from each other, cross-legged, staring intently at a cardboard box in between them with a lamp hanging over them. I took a guess at what was inside. When I said hello X didn’t respond; he probably hadn’t noticed my presence yet, which I was accustomed to, while F. was cordial as ever. He said that X had another disagreement with his brother and headed over here for the time being. I wondered what that last part exactly meant.

I crouched and peered into the box, feeling a bit silly between the two. We were alone in the house. His father was gone pretending to work. (He was one of those people who, due to the nature of his position, could easily never stop by the office again and keep getting checks in the mail for the rest of his life.) Only a few strident birds interrupted us. I reached out to hold the egg, but X brusquely stopped me. The hue was a bit off for a chicken, it was a little bigger and leaner, more elliptical. I lightly placed a fingertip on it; it was terribly warm.

After a minute or so of just sitting there, F. explained that the egg had remained the same ever since he received it three days ago at the New Patricians rally. He didn’t really know about incubation, but figured he was doing a good enough job. F. has a high opinion of himself. X interrupted to add, in his charmingly unique way, that the egg was important and crucial to “something,” and he had mostly come over here to check on it and made sure it was developing well. I didn’t know whether to believe him.

“We can prove a connection,” He rambled on. “We can show the rest that they are linked to the group. The group that took E.’s father’s house.”

He had touched upon a subject that not everyone was comfortable with.

“Wasn’t her dad in a sort of charity society?” F. asked. X denied this. He assured us that the Clan is not only a charity association, or a club of rich old men, and much less an inoffensive New Age deal like the Patricians are supposed to be. It was infinitely more than that.

“I think it’s going to be one of the nobles,” He muttered.

There was a silence then. For the first time that day I noticed that he reeked of alcohol.
“Nobles?” F. arched an eyebrow.

X stared at us like we had just asked him what one plus one was. He stared at us long and deep, as if he were going to reveal a particularly difficult secret. Sometimes it was hard to see his eyes underneath the unruly hair. He suddenly sprung up and started asking for a piece of paper.

We couldn’t find anything that hadn’t been written on, so F. ripped a page from one of his father’s documents and let X go to town with it. He madly scribbled with a pencil sharpened and re-sharpened to the point that it was only a few centimeters long, which he produced from his back pocket. He kept erasing parts of the drawing for no reason and it only made things more muddled.

Then he handed us the drawing.
He pointed at each of the drawings and stammered to say something about them.

Then he pointed at the last drawing on the bottom.

“Null, bad, dogs, they hate them. The Clan hates them. I don’t know.”
I studied the picture for a moment. Five animals with exotic names.

F. arched an eyebrow and asked him where he got that from.

“The fucks at the park,” he replied nonchalantly. Apparently he had pieced it together from that encounter and a number of other incidents, like the hotel, the bath house and the dumpster. Everything in the notebooks. It was his pet theory, I guess. He said he wasn’t sure about the names but he was sure about the pictures.

He them crumpled up the paper and handed it to me, practically pushed it into my hand as if he wanted nothing to do with it. I said nothing, quietly unfolded it and put it in one of my school books. I made a mental note to tell B. about this and maybe store it in the notebooks.

X grew silent after that. We tried to coax him into revealing more, assuming that he knew something else, but he just stared intently at the egg and ignored us. My legs grew numb and I asked F. if I could go out for a cigarette. He accompanied me.

We sat on the lawn chairs by the empty pool, dirty and covered in webs. I stared off into space, something very easy to do when the sky is painfully monochrome, as if it were a screen draped over the neighborhood. F. smoked in silence.
I asked him if X was staying at his house now.

He figured as much, he replied after a few moments of apparently mulling it over. He added that he didn’t want X to go back home at the moment because he needed someone to take care of the egg while he was off carrying out errands or working part-time jobs.

I asked him if that was what he was doing now that he wasn’t in university anymore. He nodded slowly. He said his father had more or less given up on interacting with him beyond the common courtesies of hello, goodbye and please pass the salt. He just sent him off on errands that he was too lazy to do. He was set to deliver a package in District 11 tomorrow. I looked at him with a tinge of sadness. F.’s ambition had deflated. He used to do so many things back in school, and excelled at most of them. But back then we all had a future. The future then arrives and is completely foreign to your expectations, so you retreat into past lives.

I was about to say something like that, but then we heard yelling from inside the house. It was X.

When we got back in we saw him holding the cardboard box above his head as F.’s dog leapt up and tried to swipe it off his hands, barking and growling. It was a beautiful Weimaraner that F. has had since childhood. His name is Drogo, I think. He appears and disappears from the house. Sometimes I never see him at all.

F. grabbed him by the collar and dragged him into the kitchen, then locked the door. It looked remarkably difficult as the dog struggled and yelped to break free, but eventually yielded to him.

We could still hear scratching from the other side of the door. F. asked X if the egg was okay. He nodded profusely.

X said that it was time to move the egg into a safer place. F. motioned to me, inviting me to his bedroom, but I declined. Somehow two hours had passed since I had come to the house and it was time for my next class. I wasn’t really thinking of assisting, but I didn’t want to stay there, either. I felt like I was intruding.

So I said my goodbyes, picked up my bag and walked out the front gate smoking a cigarette. I’ve picked up the habit from B., by the way. I really wish I hadn’t, but it’s comforting when you’re standing in the middle of the street and have absolutely nothing to do. I had to walk down the winding streets and pass by many joggers and dog-walkers, looking at me with mild curiosity and disapproval, until I got to the bus stop. I felt a little numb and strange as if everything had ceased to move for a moment. It might have been the cigarettes, I’m not very used to them yet. It felt like a resigned calm, not necessarily good. Like a kind of fatalism in the face of death.

I sat waiting for the bus and strangely felt like crying. I didn’t go to class that day.

I've been looking for the drawing referenced in this entry. It doesn't seem to be in the notebooks, at least not anymore.
Publicado por L.B. en 17:16