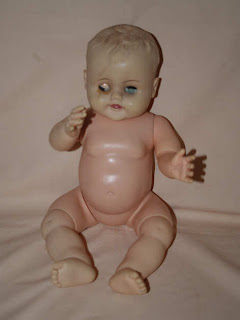 T. named her new doll Monica, I think after Monica's Gang. T.'s mom is Brazilian and she used to bring her kids' comics from there and Monica's Gang is like the Brazilian equivalent of Peanuts or something.

I told T. that the doll was bad news, though. She had gotten it at one of those big flea market fairs. The doll looked really old and the facial proportions were off, it's like they consciously tried to NOT model it like a real baby. It hadn't come with any clothes so T. put a doll-sized one-piece white summer dress on her. Oh god, why am I referring to "her" as if it was a person?

Anyway, back then we were all in grade three or so and even then K. was already very sensitive to what we have come to refer to as "Weird Shit"; for example she knew about the thing in D.'s garden way before anyone else. She said Monica was bad news, and I agreed. I always agreed with K., she's a lifesaver. We tried to convince T. to throw Monica away, but she's always been stubborn when it's worst for her, and instead she started taking Monica everywhere just to spite us. We threatened to stop being friends with her and such.

But in the end we all loved T., we still do, and we didn't stop being friends with her, but we hated Monica and its vacant, vaguely deformed stare, like a child born from generations of incest, gave us nightmares at night. So one day we hatched a plan to rid ourselves of Monica forever.

We went to the park. It was T., K., D., and me. A. and I had come up with the plan. In preparation, we had dug a hole near Echo Lake, behind some bushes, where we would bury Monica. First, we left our backpacks and things behind a tree in the park, and T. did the same, leaving her bag with Monica in it and nothing else.

Then, while we were playing at the monkey bars far from there, A. sneaked behind the tree and took ALL of our stuff in secret. We were all in on this except for T. When we got back and noticed they were gone, we all acted shocked and assumed that our stuff had been stolen. T. really must have loved Monica because she was bawling the rest of the day.

Later that afternoon, I met up with A. He gave me everyone's stuff and I gave it to them later. But we kept T.'s bag, and the doll inside of it. We pedaled to the lake. We went behind the bushes and took Monica out, handling it as carefully as possible.

We threw her into the hole and then we piled dirt on top of it as quickly as possible. We covered it with soil until it was no longer a hole. And then we breathed a sigh of relief. Until we heard the crying.

Apparently Monica was one of those baby dolls that emitted a crying sound periodically, like many such toys do. But we had never heard it before. T. had never told us about it. Given how much she loved Monica, that was odd. I don't think she knew. But if she didn't know, then she wouldn't have put batteries in, so how was the doll making that sound? It was a high-pitched analogue squeal, it sounded as old and sinister as everything else about that abomination of a child's toy, and we didn't stick around long enough to find out how we could still hear it through all the dirt we had piled on top of it. We got out of there.

T. never found out about what really happened that day until many years later, when we started university. A. accidentally told her while drunk. She wasn't upset. She agreed that it was the best thing to do. Apparently that doll had also given her nightmares, and the only reason why she hadn't personally disposed of it was to spite us. Stubborn, as always.

A. and I wouldn't dig out that hole until one or two years later, when we used it as a makeshift altar to a sacrificial god. (That's another fun story with a somewhat odd ending.) Once we dug it out, Monica was nowhere to be found. Plastic doesn't just decompose into nothingness. Our favorite (and most dreaded theory) is that, after we left, some girl passed by and heard the doll's crying, dug her out, and, charmed by it, took it home. Monica is probably still out there. It doesn't feel like she was something a bunch of kids could've gotten rid of so easily.

I don't have much to say about "Monica". It was almost certainly written by my brother as well, as it references the events of "Xochipilli." I don't have any memories of this doll, and there are no features described that could help me find the model or manufacturer.
Publicado por L.B. en 16:46