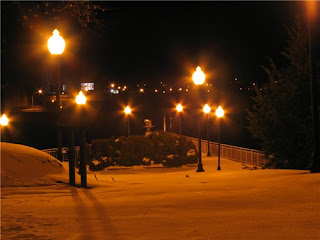 Do you remember all the stories your parents told us about Yuga park when THEY were our age? It was like the nicest most tranquil beautiful genteel bubblegum place in the world, it was cardigans and schoolgirls in mini-skirts and kids playing soccer until five in the afternoon at which point they went home and fought over control of the TV remote because they wanted to watch cartoons but their older brothers wanted to watch re-runs of old action movies and then mothers would come in and say, "Fuck you both, we're watching my afternoon soaps", and that would be that, and... Oh man, weren't those nice and fun and clean times? Now what does Yuga park look like? I'll tell you what it looks like, it looks like cats and whores. Cats and whores. Did you know about the whores? Yeah you knew about them alright, you're a lot more, oh let's say WORLDLY then you let on, I know that perfectly. Anyway what were we talking about?

Oh yeah Yuga park, right? Yeah, well, I met up with the guy--you know, The Guy, the one I've told you you should talk to, I've told you this before, he runs the record store deal out of his apartment, he's in on this shit too--, anyway, I was meeting up with him, I think I was sitting on the bench that's next to the kids' see-saw or maybe it was in front of the bust of that general commander sergeant, the park was established in his honor or something. Actually I think I was sitting on the bench in front of that sign they just put up the other day, something like "Please clean up your pets' waste" or whatever, anyway, it's all bullshit.
It was like nighttime but not really nighttime, it was twilight actually, it was around six. It was that time of day we all love because it feels lazy and old and the sunlight is coming from just the right angle to illuminate everything like an old picture, you know? You know about this. [Laughter] Shut up. Shut up! Okay so Yuga park. I'm at Yuga park. This is like just five days ago, this is completely recent shit, I hope you're paying attention because you and I, we can't go to that place anymore. As a matter of fact I suggest you advice all your little friends on the dangers of Yuga park, and I'm not just talking about getting mugged or drugged or raped or kidnapped at night or all that other fun teenage shit, I'm talking about REAL danger, I'm talking about the guys, you know the guys.

So I met up with The Guy--you know, The Guy, don't make me repeat myself--and he was selling me this really good weed for a really good price, I'm not always this adventurous, you know, it's like my dad said before he died, way before he died, he said, you know, the hard stuff is fun sometimes, but, sometimes you just want some good, old, sticky weed, my dad was a hippie, have I told you that? He was a hippie motherfucker, and so was my mom, but she's not anymore.

Where were we? It's cold. Oh yeah, this asshole. This asshole sits next to me and starts killing my buzz. I think he was trying to provoke me, probably, he was whispering this shit at me, trying to look totally normal and natural, he had a snake tattoo, by the way, it was this stupid fucking snake tattoo wrapped around his arm, it was the stupidest shit I've ever seen, and I've seen lots of stupid shit, mostly coming from old people.

So this guy says something like, "Do you know who the Brutalists are?" And I'm like, fuck, now I'm screwed. But really, really screwed. Because well, he's talking about the Brutalists, and--what do you mean? The Brutalists, they're all part of the group, it's a thing they do. It's the Brutalists, the Nobles, the Legion, and... one more but I don't remember what it's called. Write this shit down later. This is exactly what they do. I said something like, fuck you, man, I don't know what you're saying, leave me alone, and suddenly I realize it's nighttime and everyone has left and there are like five more of these assholes, they were all dressed really nicely, though. But they were all surrounding me.
And they just look at me, and they're grinning. Really wide grins, they have really clean teeth and really white eyes, like, around the eyes. But they're pure evil. I just know that. I can tell. So the one sitting next to me stands up and says, come with us.

I'm not fucking A. or whatever, okay? I can't just activate my super strength or whatever it is he has and pounce on five guys. Plus I was still tripping, when I told you that The Guy's shit was good I wasn't kidding, by the way. So I just keep quiet and keep my head down, I look to see if there's any police or decent people that might help a poor boy being assaulted by a bunch of evil men, but there's nobody around, Yuga park is fucking deserted all of a sudden. It's like people disappear on those few moments when you would actually like them to be around.

So I went, reluctantly with them, I thought they were going to take me behind some place and beat me up or mug me or worse, but no, these weren't muggers, of course, they weren't a gang, either. These were upstanding members of society. I picked it up the second he started talking about the Brutalists. These were the assholes who were kicked out of the Clan of Adoration--I think that's what it's called--and wanted to get back in. So they started asking me, where does E. live? Does she live with her parents? How does she rank? How long have they been in the clan? And I just shake my head.
I'm not a loser or a coward or a traitor, I wasn't going to say anything, my plan was just to pretend that I didn't know E. at all, and didn't know what they were talking about either. Actually I don't know how they even knew that I was associated with any of that, and I'm not, anyway, so it doesn't make sense. But back to the story, I was in this fucking seedy back alley, there was no moon in the sky, just a really desolate streetlight in the far left, and I have these five guys ganging up on me, and I think at this point I started to make peace with the fact that I was going to die here, because the guy with the snake tattoo takes out a knife.

But I think I got really brave all of a sudden, I was like, fuck, I don't care, you're going to carve up some kid because of something so stupid, are you retards, I started to really make a racket, I think someone could have heard me in the distance, I figured that if they didn't stab me first someone would come to my rescue, but no one did. Plus it got really foggy that night, which was weird because it's still summer, but whatever.

And they kept pushing and pushing. And I don't really have much else to say because I kept denying everything. So the guy got really mad, he picks me up by the collar, the other ones start inching closer, I can feel their combined breath on my face, it was caustic, they had the worst breath in the world, like they had rotten from the inside.
They tossed me onto some garbage bags in a back alley and left me there, I was still in a daze, and I didn't see where or how they left, but I think they got in a car after turning a corner. And well, fuck, you can see what kind of reminder they left me with. [Points to sutured cut on left cheek] It was pretty deep, by the way. The doctor said I was lucky or whatever. I told mom that I got mugged, what else was I gonna say anyway.

Don't tell E. about this, I don't want her getting paranoid. They're not gonna touch anyone unless you get in their range of action. Just don't go near Yuga park. I'm pretty sure they're keeping tabs on all of you, on your whole little group, so I'm going to try and keep anything bad from happening. But I can't promise anything. As you can see. So just be careful out there. They're losers anyway, this isn't like the New World Order or anything, just a bunch of angry old men. You know. Old people. They're the worst.

Sorry for stopping by your house while you were out, but I thought I should leave this in the Books as soon as possible. I forgot to tell you that I was still holding on to a transcript of this back from '95. It's a good idea that everyone re-read this sometime. You know, because it's X.

- F.]
[end]
L.B.'s Considerations
This appears to be the only testimony by X from what I've found in the notebooks until now. As for the "Clan of Adoration", I have no idea of what it's supposed to be. Frankly, it sounds a little silly and very novelesque. It's true, by the way, that Yuga park has deteriorated over time, and today it is frequented by prostitutes and, as you can see, young people looking to buy drugs.
Publicado por L.B. en 16:07