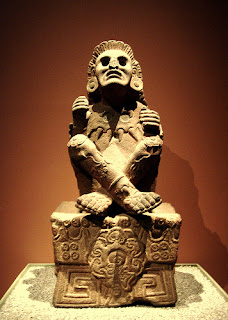 It seems that in every group of childhood friends there is one requisite expert in tall tales. The kind of boy who will tell you that there is a fourth flute in Mario 3 or a super-secret character in Street Fighter. Or that his Dad killed a lion on his trip to Africa. Or that his Mom is a movie actress. You know the type.

A. was our resident tall tale specialist, and one of my best friends—he is still both of these things. We mock him and enjoy his alleged exploits, which he can never back up. When we were still in grade school and [Sister] was a baby, we had been learning about the Aztecs in school, for some reason, and A. and I were obsessed with the concept of ritual sacrifice, especially if it allowed for communion with the gods.

So what we would do is, we would head out to Echo Lake [note: this is the same lake mentioned in the "List of People who Kill Animals & Other Things"]. We would roll up our pant legs and stand around on the shore with glass jars, looking to swipe up some fish. Some relatively large ones got close to the surface and sometimes we got lucky. The other kids feeding bread crumbs to the geese would look at us weird, something I would quickly get used to.

Now, prior to this we had dug a small hole in the ground behind some bushes, near the rusted swing set that you can still find there. The hole was originally dug out so A. and F. could safely bury T.'s doll, which is also an interesting story, but a different one.

At that point we weren't using the hole for anything. We would take the fish there and gut them with our school utensils (pens and pencils), while they were still alive, and then we would toss their smelly remains into the hole. With our hands covered in fish-blood, we would kneel before our makeshift sacrificial altar, and recite this solemn prayer: "We make this sacrifice to you, O, Xochipilli, and hope for guidance in return."

Sometimes after our daily sacrifice we would sit there and wait, taking turns putting our ears close to the hole, waiting for some voice to emanate out and reveal, I don't know, our fates, or the existence of a God, or the answers for tomorrow's Math test. Eventually we would get bored and go do something else, but continued to do this for approximately one month.

Looking back on it, I find it felicitously odd that nobody called us out on our strange and recurrent behavior. The other kids that regularly went to the lake simply kept their distance. The altar of Xochipilli was tucked away in a faraway part of the park, and nobody used the swing sets anyway, so the pungent smell, which gradually became more notorious as the hole got full of rotting, gutted fish, was hardly ever noticed by others.

Xochipilli would not respond to us, but our efforts went undeterred. As I mentioned, our daily sacrifices went on for at least a month. Then something rather momentous happened.

We weren't the only kids in the neighborhood with a penchant for animal cruelty. There was another gang of kids, one or two years older than us, who would hang out near the lake and throw stones at the geese. I figure they mostly had the intent of simply scaring them away, but on one occasion, one of the kids hit a goose squarely in the head. Very good aim or luck, really.

The adults at the scene were mock-horrified for the violent tendencies of children these days, and how THEIR generation wasn't like that, and how video games were to blame, and so on. The goose was violently trying to swim, suspended upside-down, drowning while trying to make it to shore. A concerned father waded a few meters into the water, grabbed the animal by the leg, and put it down softly on the shore as a crowd of onlookers gathered.

Its head had been smashed and it was bleeding profusely. Some silly old lady suggested that they take it to a veterinarian, which was immediately dismissed by everyone with a modicum of common sense. It was understood that the bird was dying, and nobody was brave enough to put it out of its misery, so they just left it there. The goose convulsed and flapped its wings in vain every minute or so. The adults had left the scene, taking their children with them, and in a matter of minutes that section of the shore was left deserted. The animal struggled through its final throes.

Of course, A. and I had other plans for him. In our minds, it went like this: the bigger the sacrifice, the better the response. And this was a BIG sacrifice.

Once the area had been abandoned, we sneaked close to the animal and confirmed that it was still barely clinging on to life, as demonstrated by its infrequent spasms. We dragged the animal back to the altar of Xochipilli. I told A. that he should have the honors for this one, mostly because I felt queasy about it.

He was initially drunk on blood-lust, and without thinking about it twice, he took out his pen and stabbed the animal in the breast. Warm, red blood jetted forth. That's when we realized that we couldn't mutilate it. The goose seemed too alive, not alien like fish, too similar to our own pets. So we just stood there, feeling a little bad about ourselves, waiting for it to finally die. It struggled for only another minute or so.

We quickly got to work. By this point the hole was almost entirely full of fish guts--rotting ones, at that. It's a marvel that we could stand to be near that horrid smell, but I suppose you have a greater resistance to these things as an intrepid and somewhat disturbed child. We grabbed the goose and pushed it into the altar of Xochipilli. Our hands were once again covered in blood.

With its new sacrifice, the altar looked rather sinister. The goose's smashed-in head poked its way out of the hole, its neck, sustained by rigor mortis I guess, propping it up, with one broken wing sticking out, and feathers strewn about. We looked at each other uneasily, decided to say our prayers and quickly go home, in unspoken agreement that our days or worship were over.

"We make this sacrifice to you, O, Xochipilli, and hope for guidance in return." I still remember that prayer perfectly. This time we didn't bother to try and listen for a response, partly because we feared that we would actually get one. We got on our bikes and furiously pedaled home.

This incident took place, to the best of my memory, in August of '90. And you know what happened in August of '90 to the lake. It showed up in the papers. All the fish turned up dead overnight, floating belly-up on the surface. And that lake has not been kind to life ever since. Like with the kid who drowned "mysteriously."

I suppose that Xochipilli rewards the patient. I didn't go down to the lake for years after that. Neither did A. We never checked to see if someone had bothered to clean up the hole and the mess we'd made. When I finally went there, there was not the slightest trace of the altar. And I don't like going there. There are still some geese left; they have nothing to eat but what others feed them. And the way they look at me—I know this sounds like I'm trying to make things spookier, but it's true—the way they look at me, it makes me feel evil.

This story was almost certainly written by my brother, as it matches his style, and A. was indeed, as far I know, his best friend. According to my parents there was a time when he, as a child, spent a lot of time at Echo Lake, so it fits. As he mentioned here, the lake's fish mysteriously turned up dead overnight during August of 1990; it is generally believed that a toxic leak from a nearby processing plant caused the disaster. Nowadays only a handful of geese remain.
Publicado por L.B. en 16:43