Excerpt from Notebook 1: "Origin / To Remember" 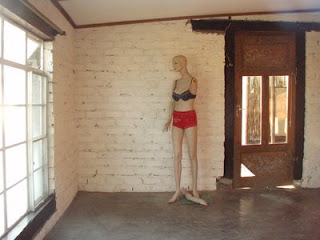 A. told me a story the other day. I'm not sure if he was kidding or not.

When A. was twelve or so and his parents would take him to see a psychologist after soccer practice, he recalled seeing a lady every day. The psychologist worked out of his apartment in the third floor of a complex. After the session was over, he would take the elevator back down and wait outside the building for his parents to pick him up. They would ask him how it went and he would reply with a half-hearted "Well."

Next to the apartment building was a small retail store, summer dresses and ladies' shoes and the like. At the time that A. was waiting for his parents to arrive, the owner was returning from her lunch break to re-open the store. She was a lady in her mid-forties, from the looks of it; she wore colorful, loud dresses with odd prints. Before coming back into the store she would stand outside and smoke, looking exasperated. Sometimes she would shoot a furtive glance in A.'s direction. He figured that maybe she knew that he was going to see the psychologist in the third floor. She had probably seen many boys like him waiting in that precise spot for their parents to pick him up.

The store windows exhibited gaudy mannequins sometimes lacking arms or facial features, draped in clothing that couldn't have been fashionable, even back then. A. would stare at them out of having nothing else to do, and also because the lady made him nervous. Sometimes she would stand directly next to him and smoke. But she would always retreat into the store before his parents arrived. She was wrinkled and covered in makeup, always staring off beyond the streets and buildings, expecting trouble to arrive.

This was when A. began to realize, after so many awkward meetings in silence, that the lady's clothes seemed to be the very same ones that were sold at the store. That seemed sensible enough, as a form of self-advertisement, or something. But what made A. curious is that whenever she was wearing one particular dress, that dress was no longer on display at the store. It was like every night she took one of the mannequins' outfits and wore it herself, then moved on to another one. A. came to assume that nobody else worked at the tiny store. He never saw anyone walk in or out. He regarded her with mild confusion and never told his parents anything.

Months after this had begun, A.'s appointment was switched to the late afternoon one day, he took the elevator up and waited outside his door. He grew impatient and knocked, even though he could hear talking, and then presumably sobbing, coming from inside. He recognized the psychologist's voice telling him to please wait a moment. So he sat on the floor, leaning against the wall. Several minutes passed with intervals of silence and sobbing. Then he finally heard steps in his direction and the door swung open. Out came the lady from the store.

She wiped her eyes with an embroidered handkerchief and stared, dumbfounded, for a moment at him, evidently surprised to see him there, as if he had caught her in the middle of doing something bad or sinful. Her face morphed into the same desperate, anxious look she always carried. Then she walked away and the psychologist ushered him into his apartment.

On the last day of these, when A.'s parents figured that he no longer needed the sessions (and had complained sufficiently about how expensive they were), A. was saddened to realize, while he waited outside for his parents to arrive, that the store had closed and was now empty.

I asked A. to write this story down himself, but he declined.
Publicado por L.B. en 17:37