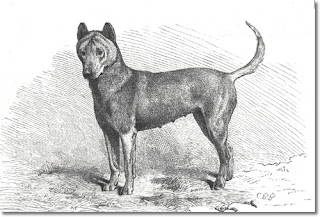 Sensationalist nutjobs are nothing new in the morning news. You probably remember that cab driver who went around picking girls up and stabbing them with a screwdriver. A screwdriver. They called him "The Screwdriver Psycho" because they're not very creative around here. The Dog Killer was something like that. It was in the early nineties. T. probably knows the exact year.

Somewhere around this time, dogs in the city's District 2 started turning up dead. They had usually been strangled; later on the Dog Killer took on more grisly ways like crushing their heads. Some of them were also poisoned, but cruel neighbors poison others' dogs all the time if they're being too loud or obnoxious, so it's unlikely that most of those killings can be attributed to him.

The Dog Killer story initially perked up the media's interest when he started branching out of the neighborhood. Family pets were turning up dead via the same methods all over a certain sector of the city. All breeds and sizes, often multiple victims. The motivation behind these killings was practically non-existent. It's assumed that a lot of stray dogs turning up dead around the time were also his victims, but stray dogs turn up dead all of the time, so it's questionable. What scared people was that a.) Since the killings were seemingly random, he was probably insane (or just really hated dogs), and b.) a lot of these killings involved breaking and entering at least the back yards of homes, which meant that at any point the Dog Killer could move on to people. The fact that he didn't bother to take advantage of the moment to steal something only made everyone more afraid of him, because it wasn't rational. I remember my parents setting up an alarm system at home for the first time back then. They also moved my brother's crib up to their room so he'd sleep with them for the time being. Back then I was still in grade school, so I'm not sure what I was supposed to do if I came face-to-face with a maniac, but with a baby it's different, I suppose. Not that I'm resentful, anyway.

The Dog Killer was at large for something like five months, and never far from the papers, though never quite making the headlines. He was sort of a lurking, puzzling shadow in the back of everyone's minds. A lot of people took their dogs in to sleep inside the house with them. Many more people got rid of their dogs so the Killer would have no reason to enter their house. Walking down the streets meant seeing many stray dogs, some of them with collars, having been let go by their owners, wandering and scavenging for food.

During his spree, many people came forward claiming that they were the Dog Killer. But when the killings continued it became hard to believe. There was a certain young man who appeared in many news reports and talk shows after supposedly providing proof that he was the Killer, but it was then proven false. I'm not sure why so many people wanted  everyone to think that they were this person, but that's fame for you.

I say that T. probably knows the exact year when the killings took place because the whole thing started in her neighborhood. In fact, her neighbors' dog was one of the first victims, if I recall correctly. We actually didn't have a dog, so my parents were just being paranoid with the whole alarm thing, as they usually are.

At this time one of the people who owned a dog that turned up headless the morning after claimed that she saw the Dog Killer as he ran out of her garden. She was a very old lady whose pet had been her only companion. It was a popular sob story in the media. She was also very superstitious. She claimed that the Dog Killer was not a man, but a devil. She said that he was a shadow with red eyes who vanished upon being seen. Most people dismissed it as the ramblings of a senile old lady, but a good part of this country is pretty superstitious as well, so others took it more seriously.

Then the late-night ads started.

I only saw it once for myself. They aired very late at night. I had once stayed up until like 2 A.M. watching X-Men reruns, when all of a sudden the TV faded to harsh static, and then came up a grainy image. The whole thing lasted about thirty seconds. It was slow-motion, low-quality footage of dogs simply laying there, presumably dead. I don't know if it was footage taken from the news or filmed by the broadcaster, but the dogs were obviously victims of the Killer. The "ad" was unnerving by itself, but even stranger was the background music. It was some kind of ritual chanting, or at least that's how I remember it. Kind of like something you would hear people singing at Mass, but in a weird tone. Meanwhile you had these panning shots of dead dogs. Then, finally, at the end, superimposed in big white letters, "PLEASE STOP." Then the ad ended and faded to static, which was almost instantly replaced by usual programming. It was chilling.

When the existence of these ads seeped into the cultural consciousness at large, it became clear that they were showing up in all sorts of channels, interrupting cartoons, soap operas and pornography without discrimination, usually between 2 and 5 A.M. And even more interestingly, they were not paid for by the channel companies. They were not official ads; somebody was jamming the signal of these channels late at night to broadcast the ads. Nobody ever found out who it was. The ads stopped after a few weeks.

And then, so did the Dog Killer. At the time people had more or less gotten tired of hearing from him anyway, but eventually the killings seemed to subside. In any big city dogs turn up dead on the streets pretty much every day, but none of it seemed to bear the Killer's mark or align with his modus operandi. So it was assumed that he had gone back to being a regular psycho, or returned to the depths of Hell for those who believed the old lady's account.

The Dog Killer's identity, as well as that of the mysterious broadcaster, are unknown to this day, at least as far as I know. (Some of my friends probably have their pet theories, though.) This guy who used to put up compilations of popular South American ads from the eighties and nineties on YouTube had one of the dog ads up, but according to A. it's been taken down. Just another strange tale from the city.

It's clear that this was written by my brother. The baby mentioned was me. I scarcely remember the Dog Killer. He isn't discussed much these days. I never knew about the videos, though. I asked my parents about it and they didn't remember anything, either, so maybe it was a piece of fiction tossed in by my brother to spice things up. I looked it up on YouTube but got no results. (There are many videos of people abusing dogs, sadly, but nothing like my brother described in this entry.)
Publicado por L.B. en 15:33